Could a UK heatwave exacerbate the coronavirus crisis?

Comments Off on Could a UK heatwave exacerbate the coronavirus crisis? 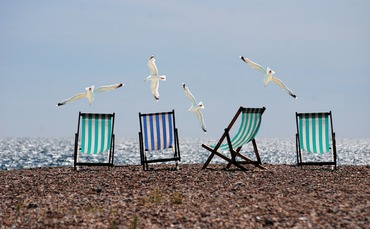 ‘A heatwave coupled with a second wave of Covid-19 infections would put enormous strain on our already overburdened doctors, nurses and other key workers’

A great many frailties, structural problems, and inequalities sitting right at the heart of the economy have been exposed by the coronavirus crisis.

The pandemic has, for example, shone a light on the importance of undervalued work such as waste and recycling collections to the day-to-day functioning of society. Some supply chains have been stretched to breaking point, having been severely hit in some quarters by labour and ingredient shortages. The dramatic decline in demand for oil products as lockdown measures kicked in around the world has brutally exposed the dangers of making fossil fuels the global economy’s most influential commodity. And, most impactful of all, the uneven death rates for different communities and the wide range of lockdown experiences have highlighted deeply entrenched social and racial inequalities.

Now, as spring moves into summer in the northern hemisphere, there look to be further challenges ahead which threaten to expose yet more societal fault lines and vulnerabilities as climate impacts escalate.

On a global level 2020 is expected to be the hottest year since records began, and as summer gets underway a number of heatwaves are already being recorded around the world, including in India, Siberia, and the US. Meanwhile, hurricane season is getting underway. Poorer nations with less advanced infrastructure and more vulnerable food systems as ever face the worst climate risks, just as they are at risk from the rapid spread of pandemics.

And richer nations are far from immune from these impacts. The UK has, after all, just experienced its driest May since records began, the Met Office confirmed on Friday, and the National Farmers’ Union has already expressed concern at “worrying dry weather challenges” harming crops. All this comes just weeks after record rainfall and devastating floods in February. The contrast and volatility in weather patterns, which bears many of the hallmarks of climate change, has astounded scientists.

Lest we forget, last summer’s heatwaves across Europe – made five times more likely to occur as a result of climate change – were estimated to have caused an additional 900 deaths in the UK, according to by Public Health England (PHE). And this year, faced with millions of people either furloughed or working from home, and monumental efforts being made to protect frontline NHS services from being overwhelmed by the influx of Covid-19 patients, experts are today warning that a UK heatwave in 2020 could be even more dangerous. It remains a tragic fact that hundreds are still dying every day in the UK from the pandemic, and as summer gets underway, hundreds more could lose their lives if temperatures rise too high for sustained periods this summer.

“After the driest May on record, older people and other vulnerable populations may be at risk from the often deadly heat waves we increasingly see each summer, often exacerbated by climate change,” said Dr Nick Watts, executive director of the Lancet Countdown, which monitors the links between climate change and public health. He is among a number of experts from the likes of Christian Aid, UNICEF, and others warning today that volatile summer weather impacts exacerbated by climate change could undermine attempts to keep the pandemic under control.

A sustained period of high temperatures in the UK could put the NHS under serious pressure, warned Watts, who called for a greater focus on building climate resilience into UK infrastructure and services going forward. “A heatwave coupled with a second wave of Covid-19 infections would put enormous strain on our already overburdened doctors, nurses and other key workers,” he said. “It is clear that rapid emissions reductions are required, alongside further investment in health systems and a range of adaptation measures that will protect against future extremes of weather as well as future pandemics.”

It has long been known that, as weather increasingly veers between extremes in the UK – characterised by higher chances of cold snaps and flooding in the winter, and extreme heat in the summer – UK buildings and infrastructure are woefully ill-prepared. The UK’s Green Building Council has called for all buildings and infrastructure to be made climate resilient by 2030. Recent analysis by the Energy and Climate Intelligence Unit (ECIU) found that, if lockdown measures extended into the winter months in the UK, it could exacerbate already rife fuel poverty. Families living in the draughtiest homes, it estimated, could end up having to shell out roughly £50 more on their energy bills each month just to keep warm at home during the day.

Meanwhile, the government has commissioned an independent, six month review of flood insurance provision in the UK, following devastating floods across many parts of the North of England earlier this year. Conservative think tank Bright Blue has estimated even 70,000 newly-built homes in the UK are at risk of being denied flood insurance in future, having been built in floor-prone areas of England.

And this coming summer, on top of the aforementioned public health risks highlighted by Watts, searing temperatures again risk public transport being brought to a standstill as well as overheated homes, schools, workplaces, and hospitals which remain ill-equipped for keeping occupants cool. Since 2015 the Committee on Climate Change (CCC) has recommended new building recommendations are adopted in order to help guard against overheating, warning that without action the number of people dying in the UK as a result of heat could reach 7,000 a year by 2040.

All totted up, it is perhaps understandable that chair of the CCC, Lord Deben, last year bemoaned the UK’s preparations for such worsening climate impacts as akin to the notoriously ramshackle organisation of characters in the BBC sitcom Dad’s Army.

For its part, PHE yesterday launched its ‘Heatwave and Summer preparedness programme for England’ in a bid to raise public and professional awareness of the health impacts of hot weather. It warns that many of those who are at risk of harm from heat are also at greater risk of severe illness due to Covid-19, and urges the public and employers to take early precautions against these risks.

“The harm to health associated with high temperatures is not inevitable, there are things we can all do to minimise the impact of hot weather on human health,” PHE said in a statement. “Hot weather can happen with little warning and illness and deaths occur within the first couple of days. By the time hot weather arrives, the window of opportunity for effective action is often very short indeed. This means that advanced and long-term planning and preparedness are essential.”

Nevertheless, while it is PHE’s job to manage the health impacts in the immediate term, preventative action is clearly also needed at an infrastructure level to tackle long term risks, and that must take the form of renovating and upgrading homes and offices, and building more resilience into infrastructure and supply chains. That is one of many reasons why the National Infrastructure Commission last week unleashed a wide-ranging report calling on the UK to bolster its resilience efforts in the face of mounting risks from climate impacts and unanticipated shocks such as pandemics.

But if the coronavirus crisis has exposed vulnerabilities at the heart of the economy, it has also demonstrated the remarkable versatility of businesses, policymakers, and citizens to rapidly adapt, and in some cases potentially spurring longer term positive changes. As Britons eschew public transport in large numbers over safety concerns, roads have been widened and closed off to cars in cities such as London, where air pollution has dropped and bike use has shot up. Many businesses have been forced to coordinate their services and workforces entirely remotely, with staff working from home more or less full time and managing their tasks via video meetings and email.

There are positive signs that the current crisis could accelerate efforts to bolster adaptation and resilience, too, with these two key issues at the heart of a letter from more than 200 major businesses yesterday calling on the UK government for a green recovery. The government appears to have broadly welcomed the calls for a green recovery and is reportedly working on plans for a wide-ranging stimulus package that is expected to focus on clean infrastructure. Moreover, Ministers recently re-confirmed a Conservative Party manifesto promise to allocate £9bn of support over the next few years to boosting energy efficiency and shifting to low carbon heating systems. Hopes will now be high that July’s economic recovery package prioritises support for building renovation and infrastructure resilience against, extreme heat, cold, and flooding.

But time is ticking away, and this summer may bring with it weather that highlight just how urgently the UK – and indeed most of the world – needs to prepare for the escalating climate crisis, further exacerbating the threat posed by the current coronavirus crisis in the process. Boris Johnson may have pledged to “build back better”, but the UK also needs to build back stronger.