I wouldn’t have insurance without the Affordable Care Act. Now Trump is working to deprive millions of struggling Americans health insurance.

Comments Off on I wouldn’t have insurance without the Affordable Care Act. Now Trump is working to deprive millions of struggling Americans health insurance. 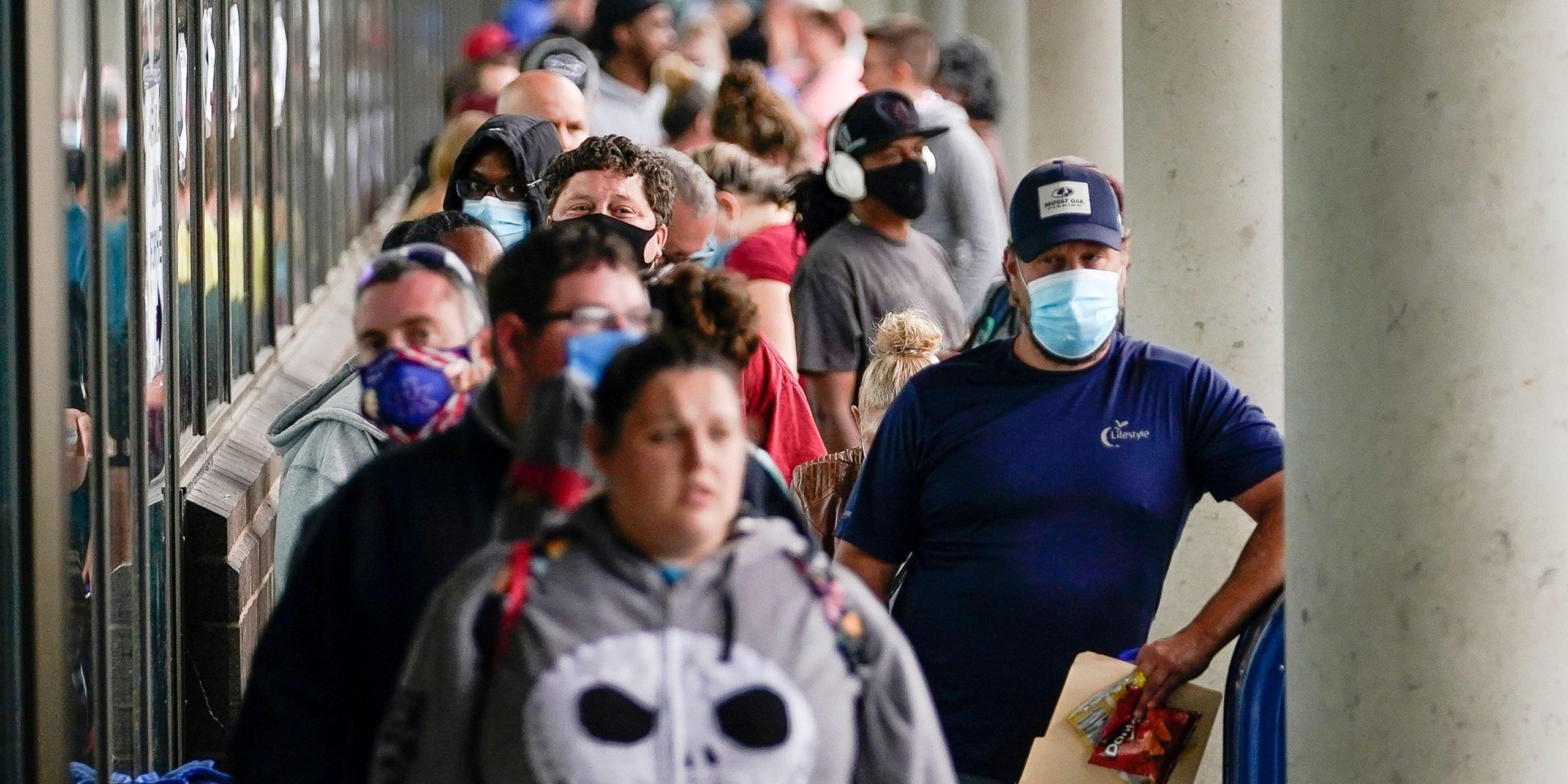 Hundreds of people line up for assistance with their unemployment claim. Because of the pandemic, millions of Americans are out of work and don't have health insurance.

Many Americans lost their jobs and/or their health insurance this year, leading to a surge in applications for medical coverage through Healthcare.gov and other government programs.
People suffering from COVID-related medical issues during and after the pandemic will need the Affordable Care Act (ACA) more than ever.
The Trump administration still hasn’t yet unveiled any alternative healthcare plan, meaning the abolishment of the ACA would leave millions of Americans with no recourse.
Bobbi Dempsey is a freelance writer and an economic justice fellow at Community Change.
This is an opinion column. The thoughts expressed are those of the author.
Visit Business Insider’s homepage for more stories.

Sitting at my desk, I can clearly hear my son hacking and wheezing in his bedroom upstairs. He’s had a persistent cough for a while now, which is more than a little alarming, given the current landscape.

It isn’t just the possibility of my child being infected with COVID-19 — and the serious and terrifying health risks that go along with it — that frighten me. It’s also the realization that we cannot afford to pay for treatment he might need to save his life. Out of my three young adult children, only one currently has medical insurance. Unfortunately for the cough-plagued son in question, he is not so fortunate.

Trump is trying to dismantle the Affordable Care Act while millions are sick, dying, and out of work.

When faced with a deadly virus that’s killing in staggering numbers, people shouldn’t have to think about whether they can afford access to treatment that could possibly mean the difference between life and death. But that’s the reality in a country where private healthcare is typically tied to employment, and the most vulnerable and needy people must rely on a patchwork of programs that make up our shredded safety net.

Right now, the combination of a pandemic and economic disaster means many Americans are experiencing parallel feelings of panic: struggling to survive financially, while also hoping they survive, period.

Given that harsh reality, it is mind boggling to me that the Trump administration would choose this particular time — during a global pandemic when more than 220,000 Americans have died and many more are sick and struggling — to try and rip healthcare away from vulnerable Americans who desperately need it now more than ever.

The Trump administration is currently urging the Supreme Court to throw out the Affordable Care Act (ACA). Depending on how the Court decides on the specific questions involved, the decision could invalidate the entire law completely and deprive millions of Americans of their only access to health insurance.

Ironically, the administration’s initial Supreme Court filing came at almost the same time as a news release from the Centers for Medicare & Medicaid Services (CMS) — a division of the Department of Health & Human Services — announcing that nearly 500,000 Americans had applied for new healthcare coverage through Healthcare.gov due in large part due to coronavirus-related job losses. That figure included people who applied through a special enrollment period for those who qualified based on loss of minimum essential coverage, and specifically focused on data for a period which ran from the end of the Open Enrollment Period last fall through May of this year.

The more recent data about healthcare coverage (or lack thereof) paints an equally grim picture. A news update from the CMS on September 30 showed more than 4 million new Medicaid and Children’s Health Insurance Program (CHIP) enrollments between February and June 2020. This represents an increase of nearly 5.7 percent since March.

Highlighting the need for universal coverage

The crisis that would result from the loss of the ACA underscores the problem with having no universal healthcare coverage that’s available to all citizens, and not tied to employment.

The United States is the only industrialized country that lacks some form of universal healthcare. Some countries, like Australia, have a dual-track system with both public and private options. Other countries like Canada and the United Kingdom have what most people envision when they think of universal healthcare: a government-run system where all citizens have access to coverage.

The public programs are typically funded through taxes, and insured citizens usually pay minimal premiums or none at all. Critics of universal healthcare programs point out some common complaints, such as long wait times and the challenge of getting pricey treatments approved without a fight. However, many Americans — especially those who have tried to get medical care while uninsured — also frequently encounter similar issues, without the benefits of universal coverage.

Giving scared people reason to panic about whether they would be able to get medical treatment if they should get sick at a time when so many are dying or facing life-threatening illness seems intentionally cruel.

This adds significant and unnecessary anxiety to what is already an emotionally stressful time, particularly for those worried about symptoms they or loved ones may be facing.

I am extremely grateful that this is one of the rare times in my life when I have decent health insurance. Prior to the Affordable Care Act, my children and I were unable to get insurance due to pre-existing conditions. However, I am still trying to pay off the bills for my out-of-pocket costs from a major surgery I had last fall. And my children have all reached an age where they can no longer be covered under my policy. (Important to note, though, that they would have been dropped from this coverage years earlier were it not for the protections made possible by the ACA.)

This crisis should serve as a wake-up call — a clear illustration of the pitfalls of forcing people to rely on employers or ravaged safety net programs for healthcare coverage. It should be crystal clear that we can no longer wait to initiate a universal healthcare program. During a pandemic, the last thing a sick person should worry about is whether they can scrape together enough cash for cough medicine or if they can afford to pay an ER bill.

And none of us should have to live in fear that the federal leaders who first failed to protect us from an impending pandemic will then further abandon us by ripping away our ability to get basic medical treatment that could mean the difference between life and death.Bobbi Dempsey is a freelance writer and an economic justice fellow at Community Change.