The participation of insurers from rural areas is abysmally low in our country. And life insurers, especially private companies, have always been focussed more towards the urban population. For a long time now, the sector has not found many takers from rural areas due to several reasons such as low literacy rates, low incomes, etc.

According to IRDAI, the insurance tech is a business that is yet to penetrate more than five percent of India’s population in the life segment, and in the non-life segment it is only 15 percent of the total viable market of $100 billion.

Spotting a gap in the segment, Abhishek Tiwari founded iAssure in 2015. The Jaipur-based startup aims to increase insurance penetration in semi-urban and rural areas, and is providing a platform for people to buy all general insurance products with point of sales persons (POSPs).

“While working in Tier-II and III markets, we realised there was a huge gap in distribution as far as insurance is concerned. For example, Rajasthan has 33 districts and 300 plus tehsils. The presence of private insurers is not more than ten districts, whereas public players have their presence in all 33 districts and another 30 tehsils. It implies that rest of the market is served by individual or corporate agents who have their own limitations when it comes to offer choice of product and servicing,” says Abhishek.

“We decided to solve this problem of distribution by digitising the insurance services, create mass level networks, create employment, and serve the unserved and underserved consumers in semi urban and rural markets of Bharat,” he adds.

According to the company, it is helping individuals sign up with the right insurance plans at affordable price. At present, the startup is providing services in the northern regions of the country, and is currently present in ten states.

A law and CA graduate, Abhishek worked with the ICICI Bank for a decade. He also served as the CEO at Au Insurance broking, and it was here the idea of iAssure was born.

Abhishek says his mission statement is simple – he wants iAssure to insure 5,600 tehsils of India and become a one-stop solution for all financial protection needs of the customers in the next five years.

“iAssure aims to solve the problem of lack of awareness, trust, digitisation, and distribution in semi urban and rural markets, which is home to eighty percent of the Indian population. iAssure also aims to bridge the deficit of trust by getting the transaction executed through a hyper local trusted resource who talks to the customer in his own language. It’s a sociable, sustainable, and scalable business model,” says Abhishek.

“When I started out, there were difficulties. Like any startup, there was lack of trust initially among customers. Building a team, creating a model, and establishing a PoC with the technology platform was difficult. Three years down the line, we realised it’s a natural path, which any business or entrepreneur has to travel,” says Abhishek. 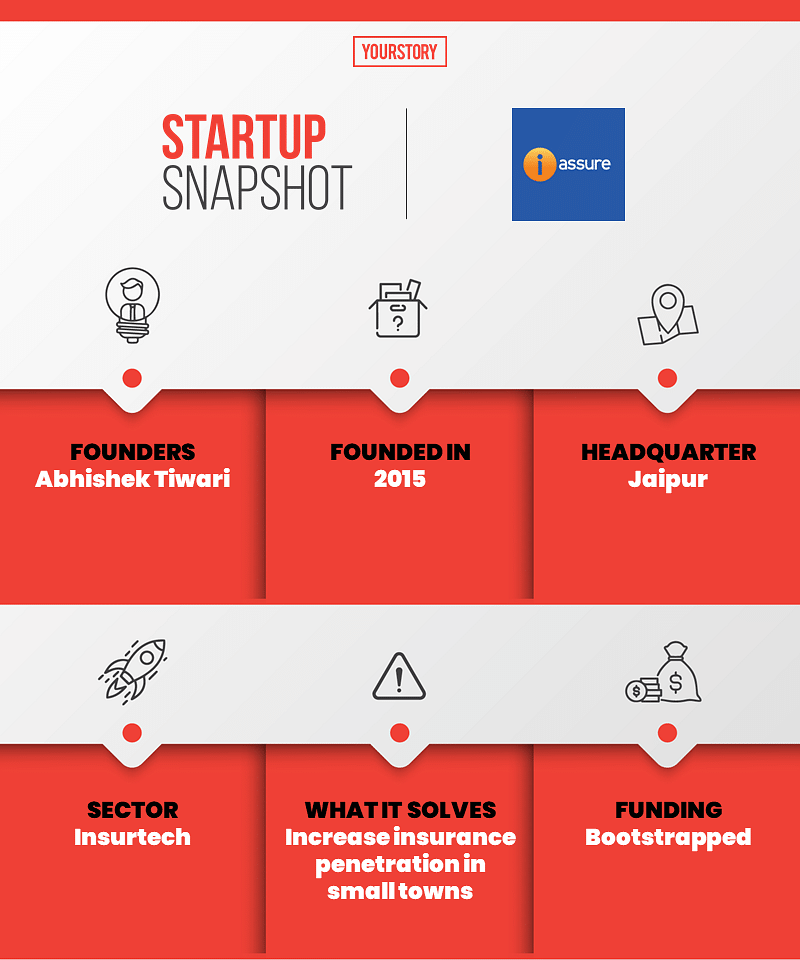 The startup appoints point of sales people (POSP) who travel to towns and use digital means to show different products and pricing to customers that suits their needs. They assist individuals in choosing the right product and also help people with digital payments.

“We recruit people with basic qualifications from remote areas, provide training to these individuals, and enable them to sell insurance in semi urban and rural markets. These people enjoy the trust of local customers as they belong to the same place, thus helping in the creation of employment/self-employment in these markets as well,” says Abhishek.

IAssure’s point of sales person can use the phone to access products from multiple insurers, and compare and advise people about the best insurance plan to suit their needs. Since all this happens on a digital platform, it is easy for them to explain the product to the customers. They can also cross sell/upsell to same customer along with a motor insurance and the POSPs can also pitch a health insurance.

The company claims to be having 5,500 POSP counters in the last three years and has issued close to half a million policies.

The insurance market in India

In FY-16, the Insurance Regulatory and Development Authority of India (IRDAI) introduced and came up with guidelines for Point of Sale Persons, which was aimed at increasing penetration of insurance products by spreading distribution. Under these guidelines, intermediaries were allowed to appoint point of sales people under them who could sell pre underwritten products. 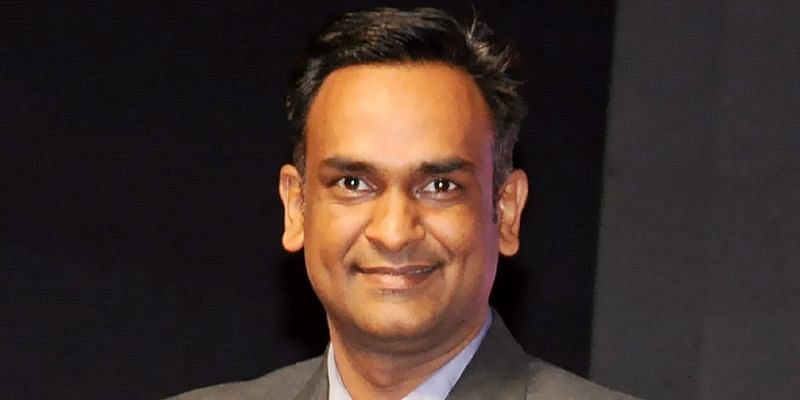 According to the startup, in the non-life insurance segment ,about 30 percent is contributed by individual agents, 12 percent by corporate agents, 28 percent is direct, and 22 percent by brokers. Therefore 80 percent market is B2B and 20 percent B2C.

With the advent of technology and the release of POSP guidelines by IRDAI, the model is now evolving to assisted sales, where there will be physical touch points (individual advisors) with digital enablement. That’s where iAssure’s sweet spot is.

The business and plans ahead

The bootstrapped startup, which is funded by family and friends, has made a total investment of close to Rs 12 crore in the company till date.

The startup follows a revenue sharing model. iAssure shares 75 percent of the revenue with the POSP who sources the business and retains a margin of 25 percent on each transaction.

Till date, the startup, which competes insurtech startups like Acko, Policy Bazaar, and Artivatic, claims to have served half a million customers. The startup clocked a revenue of Rs 9 crore in FY-20, and is eyeing Rs 15 crore in revenue by FY-21. However, the company is yet to become profitable.

“Q-1 has been encouraging so far owing to the all-time high risk recognition among customers due to the COVID-19 outbreak. There has been a positive shift in the product mix and we have booked more business in health and life insurance vertical as compared to motor insurance,” says Abhishek.

In the next 18 months, the startup wants to cover 1,400 tehsils in 10 states in its current area of operation and penetrate vertically. So far, it has covered 500 tehsils in North India.

The government and IRDAI are also relentlessly working on reforms to improve the situation. Recently, the government increased FDI to 100 percent in the insurance intermediation business, and this alone means that iAssure can scale up in the future.

The aftermath of a damaging storm is one of the most difficult situations you’ll ever have to deal with as a homeowner. You have to ensure your family’s safety, secure temporary shelter and then have the damage properly documented for your insurance provider.

In the first part of our two-part blog, we discuss the importance of working with professional roofing contractors when dealing with storm damage. We begin by discussing what “storm chasers” are and why you should avoid them:

What Are Storm Chasers?

Storm chasers are itinerant “contractors” that chase storms, offering repair services to unsuspecting homeowners. They prey on homeowners who desperately need a working roof and don’t know any better. These repair services are often done as quickly as possible, paid in cash and often without a proper roofing contract.

As these “roofers” are not likely to be listed with the Better Business Bureau, nor have a state-issued license for that matter, there will be no way to check for customer feedback or references that could vouch for them. And if you need to follow up with workmanship warranty, it will be nearly impossible to do so as they do not have a physical address or permanent phone number.

The Dangers of Working With Storm Chasers

There are many reasons to stick with professional roofers and not let storm chasers work on your home. For instance, the “repairs” they provide is substandard, cleverly disguised to make it look like they did professional work. It gives you a false sense of security thinking your roof is ready for the next storm, when in fact it’s not.

Storm chasers also have no regard for local building code requirements, which means if you engage their services, you may need to hire local professionals to correct these errors. There’s also the possibility that their work will void your existing roofing warranty as well as your insurance coverage. Ultimately, working with storm chasers will only make your roofing problems worse.

So what should you do instead? In our next blog, we discuss the advantages of working with licensed and insured roofing contractors. In the meantime, to learn more about our roofing services, call Arry’s Roofing Services, Inc. today at (727) 938-9565 or fill out our contact form to schedule a free estimate. We serve Tarpon Springs and nearby areas, including East Lake, FL.