Aspiring entrepreneurs and students wanting to learn about the startup journey and the role of fundraising can find a useful framework and numerous case studies in the book — Funding your Startup — by Dhruv Nath and Sushanto Mitra.

Featured founders of successful startups who raised funds are Nakul Kumar (Cashify), Samant Sikka (SQRRL), Jaineel Aga (Planet Superheroes), Abhishek Barari (MyCuteOffice), Amit Grover (AHA Taxis), and Tushar Agarwal (Uno Finance). The authors also document why some startups did not succeed, such as QACCO, Greymeter, and others, whose names have been changed.

Here are my three key clusters of takeaways from the compelling 240-page book, summarised as well in Table 1. See also my reviews of the related books Angel Investing, The Manual for Indian Startups, Straight Talk for Startups, and Startup Boards. 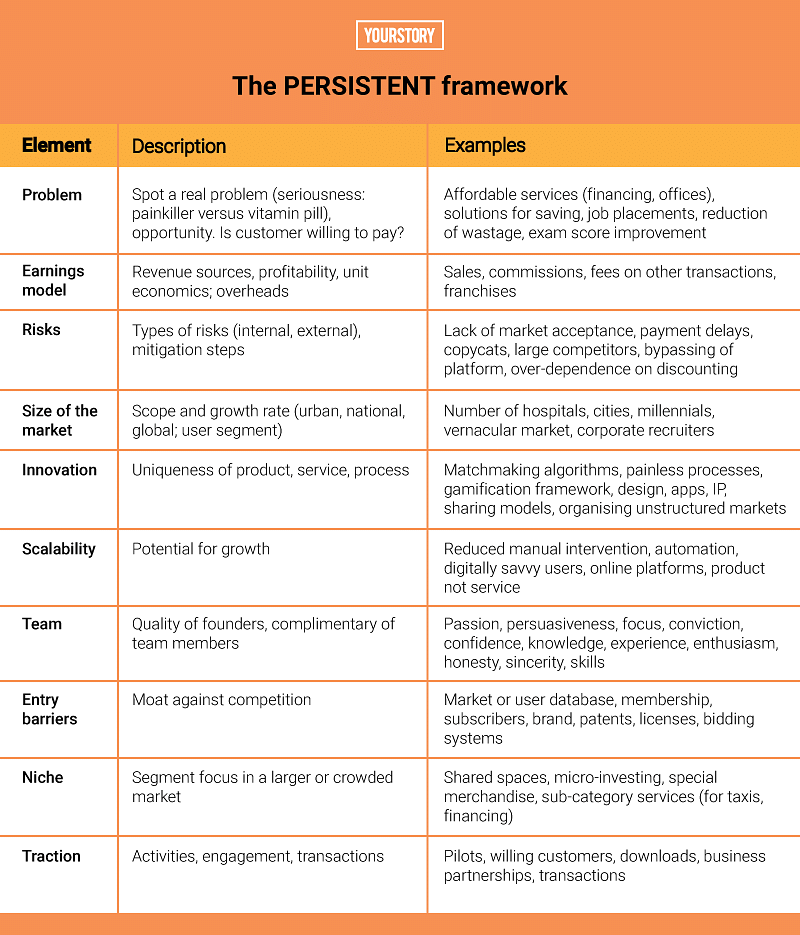 I. The PERSISTENT framework

Many founders fail to pass the test of one or more elements of the PERSISTENT framework. These include unit economics not becoming positive, or not exceeding overhead costs, or becoming profitable only after too long a period. Pure discounting cannot be sustained for a long time, and unless there is a moat, there is no sustainable competitive advantage.

For example, MyCuteOffice showed the viability of the shared-office model in Mumbai and raised Rs 70 lakh in angel funding. The startup reduced the risks of tenants and landlords bypassing the platform and reduced manual interventions by adding ranking and rating features.

It then added a new model of affordable co-working spaces. Founder Abhishek Barari got the idea for the startup while hearing friends complain about office costs. He advises entrepreneurs to keep 50 percent of funds in reserve for difficult times.

Samant Sikka got the idea for micro-savings startup SQRRL while literally watching squirrels storing nuts for a rainier day. He expanded to goal-based saving, thus showing the scalability of the model. Showing skin in the game, he was able to get funds straight from VCs, skipping the angel stage.

He cautions founders that fundraising can take up a lot of time and even draw them away from the core business. The authors also caution that a model based on “get users first then revenues later” will be harder to pitch to investors.

Greymeter began as a platform for assessing and training college graduates for the job market and raised a crore in angel funding. But, it had to shut shop because some assumptions that large companies would pay for testing and training of coding skills did not hold to be true; they conducted such activities themselves.

Another founding team that the authors came across did not make it past the angel round because the founders had only an engineering background and no business orientation. It does not help to have only a love for the product without business sense, the authors caution.

Yet another founder tried to replicate the online wedding gift registry model from the west to India. Though it was a significant niche and solved the problem of unwanted or duplicate wedding gifts, there were risks such as low entry barriers for ecommerce giants.

A founder tried to pitch her business for fashion discussions, ratings, and shopping via social media, but angels did not invest in it since it had no revenue model. Perhaps a super-angel willing to wait longer for a revenue model to emerge could have invested in it, the authors explain.

The authors document how another proposal not accepted by angels was for a sharing platform for toppers’ notes among non-topper students. Though the idea seemed good for this large market, there were concerns over the quality of notes, unauthorised sharing, and ineffective rating of notes.

Dissatisfied with his day job in an equity firm, Jaineel Aga zeroed in on the market need for official merchandise for comic characters and founded Planet Superheroes. But up-front licensing costs were high, and there were cheaper alternatives by pavement sellers.

There was market demand, however, for quality products, and he raised Rs 3 crore from angels and Singapore-based VC DSG Consumer Partners. He moved from online sales to ‘shop in shops,’ exclusive outlets, and franchises. A Japanese gaming company participated in a Series A round next.

The founders of Cashify hit upon the idea of recycling e-waste when they were disposing of empty beer bottles. They refurbished laptops acquired directly from customers instead of buying them from unorganised markets, and moved on to mobiles.

Though angels and VCs initially turned down their funding requests over concerns of being too operations-heavy, they focussed on becoming profitable, though at a slower pace. The VCs then came back, and Cashify raised half a million dollars for its growth plans. The startup makes its own brand of refurbished devices (Phone Pro and Screen Pro) and has 14 hubs in India.

Amit Grover hit upon the idea of one-way fare inter-city taxis when he was forced to go with a two-way booking based on the prevailing model. He founded aggregator AHA Taxis by working with local operators and added an automation moat via analytics for calculating prices, rating of services by passengers, and a bidding system for operators.

“Keep on building your business and the investors will come,” Amit advises.

Tushar Agarwal’s friend had personal struggles with getting financing for his father’s hospitalisation expenses. Building on his own experience in the finance and health sectors, Tushar founded Uno Finance.

He partnered with hospitals for on-premise marketing and commission rates, and built a risk analytics model based on medical research. The second round of funding helped in further growth.

QACCO (Quality Accommodation) was founded as an aggregator for boutique hotels. Though it raised angel funding, it shut down because of the limited and saturated market. There was also no entry barrier against larger players, the authors explain.

Early funding can come from friends and family – usually, because they know the founder, see some promise in their idea, and are willing to take a risk. Angel investors fund startups with the hope of getting better returns than deposits (around seven percent) or stock markets (around 15 percent), the authors explain.

Such investors operate in angel networks, which now even include aam aadmi angel investors who invest smaller amounts like Rs 5 lakh each, as compared to super angels. “Angels invest their own money, whereas VCs typically invest other people’s money,” the authors explain.

VCs invest in late-stage startups (where the business is proven and risks are lower), to the tune of Rs 5-7 crore or more. There are also “micro VCs” such as Blume Ventures, India Quotient, and YourNest Venture Capital. VCs want to see hard numbers and actual results, not just hope and promise; they want to see past performance and not just future projections.

Angel networks can be contacted via the city hubs of The Indus Entrepreneurs (TiE), or during demo days of incubators and accelerators. Meetings with angels are in groups, whereas VC meetings are one-on-one.

The authors provide tips on preparing business plans and pitches. The pitch should reinforce the key message of the startup in one phrase, line, or sentence. The structure of the pitch deck can be along the PERSISTENT framework elements, along with information on competition and projections.

Investors may expect to see positive unit economics within a couple of years, and profitability after four years, and accordingly, allot funds in tranches. Founders may ask for a crore in funding to prove the business model, and Rs 2-3 crore for the first phase followed by Rs 7-10 crore for the second phase of growth.

Growth is expected to be rapid and move away from discounting in early periods. “Remember, funding is generally given for growth, and not for survival,” the authors caution. The pitch should explain burn rates and runway periods.

Based on thumb rules, the pre-money valuation of a startup can vary from Rs 4-15 crore, depending on revenues. The authors advise founders to read up thoroughly and even get legal help to understand contracts, director rights, board functioning, preference shares, liquidation preferences, right of refusal, buy-back, drag-along rights, and co-sales (tag-along rights).

The book also includes funding tips from seven experts. For example, the COVID-19 pandemic will weed out fragile startups, according to Sanjeev Bikhchandani, Founder of Naukri.com. “Build a solid business, and valuations will follow,” he advises.

“Companies that either get too much money or get it too easily tend to use it suboptimally,” he cautions. Great entrepreneurs will be able to bounce back from failure and raise funds again. “In the final analysis, your reputation is your only asset,” he explains.

Funding is needed to build products and B2C brands quickly, explains Deep Kalra, Founder of MakeMyTrip. Besides, B2B sales cycles can be quite long. Founders should have conviction in the business, and also be willing to pivot when necessary during the tough and frustrating journey.

Investing is a “relay race” between successive waves of entering and existing investors, according to Yashish Dahiya, Founder of PolicyBazaar. He cautions founders not to try “financial jugglery” to fool or lie to investors.

“All businesses don’t have to be billion-dollar businesses,” says Dinesh Agarwal, Founder of IndiaMART. “The often-used phrase, ‘Go big or go home,’ is definitely not valid,” he adds.

The passion and quality of the team will help the founders win. Funding is not always necessary, despite the media hype and press pressure, he cautions. “In fact, lots of businesses have suffered because of excessive funding,” Dinesh says.

“There must be an alignment of thought between the investor and the entrepreneur, and there must be value-add from the investor – not just the money,” advises Pradeep Gupta, Founder of the Indian Angel Network. He also cautions against founders coming across as “smooth-talkers, smart alecs, braggers without substance, or poor listeners.”

Founders should think of funding in advance, and not just when the need is immediate, advises Sairee Chahal, Founder of SHEROES. She also cautions founders against investors looking only for quick exits, who may put unnecessary pressure on a founder.

“Clarity of thought, the presence of a strong vision, as well as a detailed plan, and the execution ability to take the company there is critical,” according to Rajul Garg, Founder of Leo Capital India Advisors.

Each chapter ends with some discussion on the COVID-19 impact on different startups and sectors. For example, startups in healthcare, education, skill enhancement, e-entertainment, insurance, and ecommerce may do well, but those in travel and tourism will be hard hit.

Companies may have to switch from growth mode to survival mode, and drastically shift from fixed costs to variable cost structures, the authors advise.

In sum, this is a must-read book for aspiring founders and entrepreneurs. The book provides a wealth of insights in an engaging storytelling format. There is also lots of humour, such as references to the power of coffee to help plan, and the power of beer to help dream during brainstorming sessions!