It’s time for another week’s roundup of Bring a Trailer auctions, and the big news this week is that BaT has been sold to Hearst Autos. A press release made clear that BaT would continue to be run as it has traditionally, at least for the time being, with the same staff and founder Randy Nonnenberg, who we spoke to recently, at the helm. For years, as BaT’s auction business increased in volume, the rumor mill had been ripe with talk of BaT buyout offers from various parties including traditional auction houses and classic car insurance brokers, but it appears Hearst Autos was the only group able to seal a deal. This week’s auction highlights include a restored Datsun 240Z and six other collectible classics. 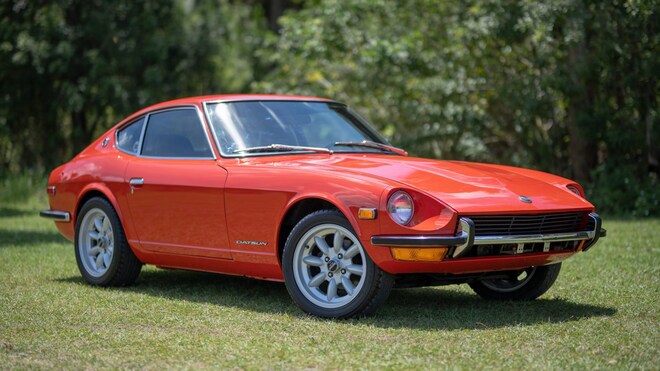 Yes, $110,240 is still a lot of money for a 240Z. No, this was no ordinary 240Z. This particular 1972 model was one of fewer than 40 examples that was purchased used by Nissan North America in 1996 (the same year it discontinued the Z32 series 300ZX in the U.S.) and subsequently restored and resold by Nissan in 1997 through its dealership network. Nissan didn’t perform the actual restoration work, instead subcontracting to several Southern California-based shops, including Z experts Pierre Z Car in Gardena. As part of the work, this 240Z was given a respray in its original shade of red, the 2.4-liter straight-six engine was rebuilt to factory specification, the suspension and brakes were rebuilt, and the interior was retrimmed in factory materials. This car still proudly wears its Vintage Z decal, applied after its restorative work had been completed through the Nissan Vintage Restoration Program. While good 240Zs have been trending upwards in value for some time, this car still brought perhaps a 20 to 30 percent premium for its inclusion in the Vintage Restoration program. Regardless, this is a special car at a fair price and still far cheaper than the original, low-miles example that fetched $310,000. 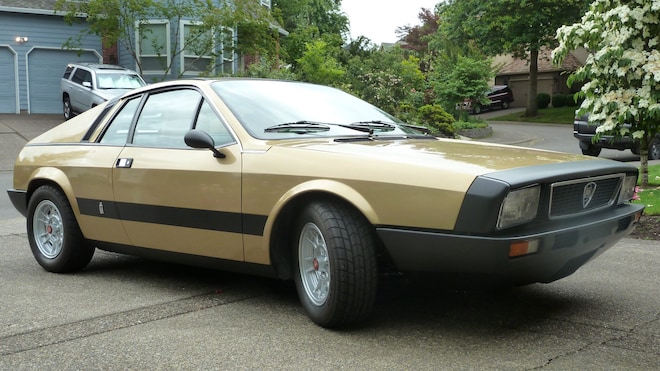 When the Lancia Montecarlo was launched in 1976, it was designed as a big brother to Fiat’s X1/9. It shared many brake and suspension components with the smaller, less-expensive Fiat, but its Pininfarina-built and -designed body was slightly larger and more muscular looking; behind the Scorpion’s seats sits a mid-mounted twin-cam four-banger, compared with the X1/9’s SOHC four. In the U.S., Chevy had already trademarked the Monte Carlo name, so the car was sold as a Scorpion, a subtle nod to chassis development performed by Abarth. In U.S. trim, the Scorpion was also saddled with large 5-mph impact bumpers and pop-up headlamps to get around DOT requirements, while the engine was downsized and detuned, making 81 hp to the Euro car’s 120 hp. The car sold here fixed all that with Montecarlo bumpers and lights and a performance rebuild of its 1.8-liter engine that should make more power than the stock Montecarlo unit. Surely one of the nicer Scorpions in the country, this one brought a new BaT record price for the model, though the cost to get it this nice was surely even more. Well bought and sold for a rare Lancia, the tub of which was the basis for the 037 Group B rally car. 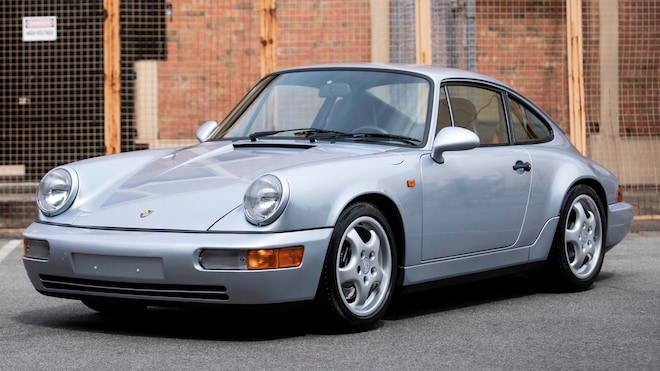 While the 964 RS doesn’t look a whole lot different from the basic Carrera 2 models (and certainly not as flashy as the wildly flared-and-winged Turbo models of the era), it’s widely known as one of the more purposeful 911s built. The chassis was seam welded for stiffness, windows were made of thinner gauge glass for lighter weight, and a whole host of luxury features were thrown out, from the electric windows and radio to the sunroof and air conditioning, all in the name of weight savings. The fixed-back bucket seats and deleted rear seats make no bones about the focused nature of the car once you sit inside. While the engine only makes about 10 horsepower more than a standard 911 of the day, the 964 RS was a fabulous driver’s car that you can’t fully appreciate until you get behind the wheel on a great road. Never sold new in the U.S. (they didn’t meet emissions or DOT safety standards), many have been brought here in recent years under federal importation laws for cars older than 25 years. Just a few short years ago, this would have been a near-$300,000 machine, but values have softened and this car’s 39,000 miles and near-full paint respray meant it was driver grade, not collector grade. The high bid should just about have done it. 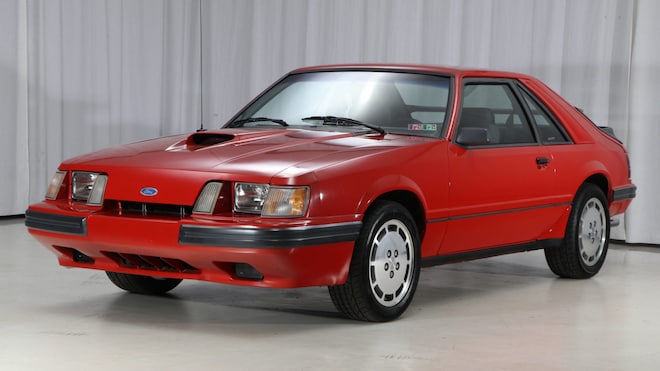 In the early 1980s, America was still in recovery mode from not just the oil crisis, but also strict new emissions standards designed to clean up pollution in the country’s large cities. For that reason, big V-8 engines were neutered with low compression ratios and other conservative tuning methods which saw tailpipe emissions fall alongside performance. For Ford, the solution was to cancel the high-output V-8 engine in its performance Mustang model and install a 2.3-liter four-cylinder engine with a single turbocharger in its place. The Mustang SVO was the result, and while it launched with 175 horsepower, by the time this car was built power had increased to 205 horsepower—about the same as the contemporary C4-series Chevy Corvette was getting from its big eight-cylinder engine in the same model year. This Mustang SVO was well preserved with a five-speed manual gearbox and just 45,000 miles from new, but while Fox-body ‘Stangs are becoming more desirable, the market is really all about the GT and Cobra models with large, healthy engines. Perhaps the selling dealer can find a buyer who’ll spend a grand or two more, but it may take a while. 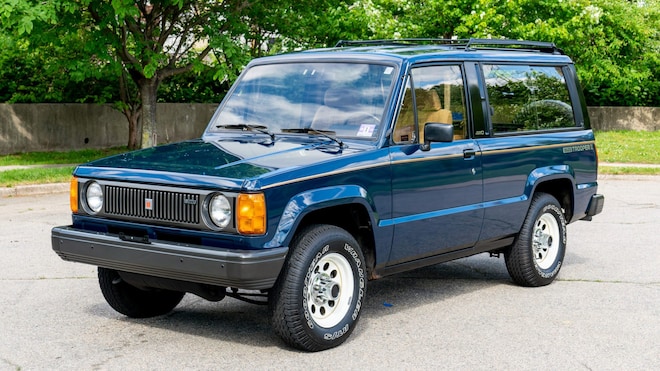 This unassuming Isuzu SUV had an out-the-door price of $12,513 when it was brand new; we know this from the original sales invoice included with the vehicle. It brought a little more than that original price tag on Bring a Trailer this week—some 34 years and 40,000 miles later. Isuzu Troopers are one of those vehicles that seem to have all but disappeared from U.S. roads in the last decade, so it’s nice to see such a clean example for sale. While these were also made with four doors and gas engines, this two-door turbodiesel with a five-speed manual is the one you want. Boxy, utilitarian, and excellent to drive off-road with its two-speed transfer case, this Isuzu should provide far more value than the overpriced XJ-series Jeep Cherokee, even at this strong winning bid price. 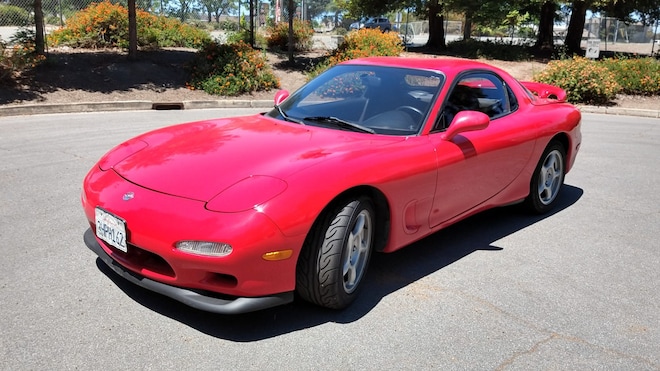 To U.S. RX-7 collectors, the most desirable model is surely the third-generation FD RX-7 equipped with the R1 package. Ticking the R1 box on Mazda’s order sheet netted the buyer grippy cloth-covered seats, a front spoiler with brake cooling ducts, a rear spoiler, a front strut tower brace, and a firmly tuned Bilstein suspension setup. It also left out many features that didn’t fit with the R1’s ethos, like a sunroof or a fancy Bose stereo option that took up half the trunk space. This car was purchased by its second owner in the mid-1990s with just 7,500 miles on it. Since then, it has traveled another 100,000 miles, with a factory replacement engine dropped in at the 70,000-mile mark in 2005. Interesting side note: the owner had owned all three generations of RX-7, but finally sold his last one to upgrade to a C8 Corvette. This one looked like a solid, honest car but it had its share of issues, including one off-road excursion on a rainy day that required some bodywork at the front end, and some paint damage on the right side that would probably result in a full respray to do the job properly. Add in the high chassis mileage and the price paid was more than enough, considering mint, collector-grade examples are trading around $50,000 range. The good news about this car is that it can be driven and enjoyed by its new owner without much worry—and despite its flaws, it will always be a desirable factory R1-package car. 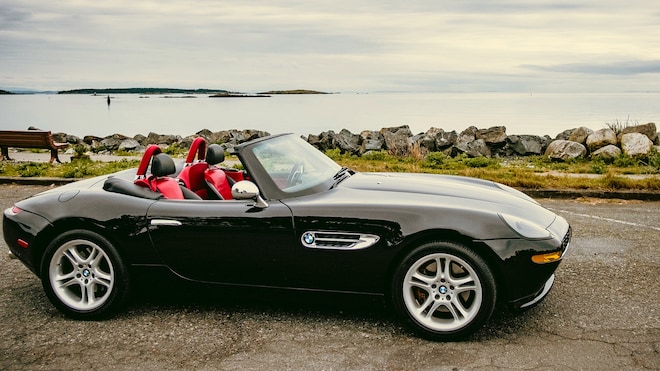 At the recent market peak around 2016, BMW Z8s were really gaining ground. Excellent cars with low mileage were routinely selling above $200,000 and the best examples, usually Alpina-tuned cars, were even cresting the $300,000 mark. Make no mistake, at $165,000, this 23,000-mile former press fleet Z8 is still an expensive and desirable car. The black-on-red paint scheme and removable factory hardtop really help recall the classic BMW 507, the car that inspired this retro M5-engined roadster, and the six-speed manual gearbox is definitely the enthusiasts’ choice. The original MSRP on a 2000 BMW Z8 was about $130,000, so the Z8 has really turned out to be an instant collectible, in the same fashion as the first Ford GT. This price was right on the money for the current market.

The post 1972 Datsun 240Z Sells at Auction for $110,240 as BaT Sells to Hearst Autos appeared first on Automobile Magazine.