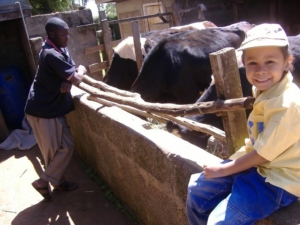 Dairy farming is a competitive business worldwide. Small and large scale dairy farmers alike face similar obstacles—slim margins, a fragile product and a decreasing market. Kenya produces 5 billion liters of milk every year and the dairy industry accounts for 5%-8% of the country’s total GDP. This large proportion of GDP means that innovations in dairy farming offer significant potential to improve the livelihoods of thousands. In light of this economic fact, new industry actors are emerging to transform dairy farming in Kenya.

Finding reliable buyers is a difficult task. In many cases, Kenyan dairy farmers are forced to sell to local traders that pay unfair prices. When the digital scale and supply chain system EASYMA 6.0 was introduced in 2014, however, conditions for dairy producers improved. In collaboration with USAID-funded programs, Kenyan tech agencies developed and deployed EASYMA 6.0 into local communities.

The process of EASYMA 6.0 starts with farmers weighing their milk at designated buyer collection centers. Producers then get an automated receipt as well as an immediate advance. This system ensures that farmers receive fair compensation for the quantity of product they supply. Ultimately, this innovation makes it easier for farmers to earn a fair living wage.

In addition to providing security in payments, EASYMA 6.0 also enhances transparency and record-keeping within the dairy industry. As a result, more than 22,000 Kenyan dairy farmers now have access to farm extension services, financial products and even livestock insurance through EASYMA 6.0.

Although a seemingly small and simple issue, spoiling milk can lead to large losses for dairy farmers in Kenya. Spoiled milk can lead to huge losses, negating much of the hard work performed by farmers. Without viable ways to fix the issue, farmers will continue to lose a valuable part of their product—and, thus, their incomes—every year.

In developing countries, safely delivering milk and dairy products is the hardest challenge farmers face. Small-scale farmers produce 80% of the milk in Kenya. Due to small-scale farmers’ insufficient access to quality storage and refrigeration, a significant amount of milk is spoiled during delivery. This struggle prompted the development of Mazzi, a durable and inexpensive jug that prevents spills and slows curdling.

Traditional jugs, or jerry cans, leave dairy products vulnerable to contaminants that cause spoilage. Additionally, traditional jugs are also fragile and very hard to clean. The Bill and Melinda Gates Foundation worked with Global Good and Heifer International to find one key solution to this issue: Mazzi.

Mazzi is a 10-liter reusable plastic container that prevents spills, limits contamination and is easy to clean. Mazzi has a wide mouth that allows farmers to use two hands during the milking process, ultimately increasing productivity. The invention also has a detachable black funnel that enables farmers to determine whether cows have udder infections, as well as a stackable lid that helps with transport and makes the product easy to clean.

The Mazzi jug will only cost $5, compared to competitors priced around $30. By increasing incomes through improved yields, this inexpensive innovation is transforming dairy farming in Kenya and improving the lives of farmers in the process.

Many farmers rely on the dairy industry to make a living, yet Kenya has not adopted technology to improve yield. MyFugo is a software application that is projected to increase milk production in Kenya by helping farmers monitor their cows in real-time. Allan Tollo, the app’s founder, explains that “the app helps the farmer monitor his cows throughout the day enabling them to tell what time their cow will be on heat for it to be served at the right time.”

The MyFugo technology operates by using a Smart Cow Collar. Farmers place the device on their cows and receive notifications on their smart devices of the exact time their cow is in heat. Farmers can increase milk production by reducing the calving period by more than six months. This innovation eliminates prevents farmers from missing cow fertility dates, decreases calving intervals and lowers feeding and treatment costs.

The app is free to use, but the collar costs $150. Although expensive upfront, animals will produce more calves in their lifetime leading to higher milk production, increased revenues and greater economic stability for dairy farmers in the long-term.

MyFugo has registered 8,000 farmers already and is constantly working to grow its user base. The app can track animals at any location, as well as identify their risk of disease. Farmers also gain easier access to veterinary doctors and loans. With many small farms traditionally lacking access to veterinary care and financial loans, this innovation offers the potential to transform dairy farming in Kenya.

Many farmers are reluctant to embrace new technologies that challenge traditional farming techniques. However, these innovations are steadily transforming dairy farming in Kenya and creating unparalleled opportunities for farmers to earn a successful living. With new technology and easy access to records, dairy farming in Kenya is traveling a new road toward lasting progress. The successful integration of technology in Kenya’s dairy farming industry demonstrates the potential of future innovation in the agricultural industry at large.