Alteria Capital, which provides loans to startups, is one the three large companies that dominates India’s venture debt market. It was started by Vinod Murali and Ajay Hattangdi, former executives of Temasek-owned InnoVen Capital, which is among the three major venture debt firms in India. The third in the pack being Trifecta Capital. Venture debt or venture lending, simply explained, is debt financing typically for venture-backed companies. Unlike traditional bank loans, venture lending caters to startups and growth companies that may not necessarily have positive cashflow or hard assets to show as collateral.

“Venture dent is a mechanism for founders to reduce dilution when everything else is attractive. This is not a bailout product, this is not a last resort. It is the way you can optimise a good situation and make it even better,” says Alteria Capital Managing Partner Vinod Murali, during a late August chat with YourStory Founder and CEO Shradha Sharma.

“It (venture debt) provides you insurance, it provides you time, it gives you that extra oxygen which you may need, that you don’t know if you have a necessity (for) or not, up front. In February, nobody thought the rest of the year was going to play out like this, nobody would have forecast that,” says Vinod.

As the novel coronavirus or COVID-19 continued to spread rapidly across the world, it was declared a global pandemic by the World Health Organization (WHO) in March. The unforeseen event and its adverse impact has left several businesses and economies across the globe reeling. The International Monetary Fund (IMF) has called it a “crisis like no other’ and its June projection estimates the global economy to grow at – 4.9 per cent in 2020, 1.9 percentage points below its April 2020 World Economic Outlook (WEO) forecast. The COVID-19 pandemic has had a more negative impact on activity in the first half of 2020 than anticipated, and the recovery is projected to be more gradual than previously forecast, according to the IMF

“It’s like an umbrella you buy before it starts raining, once it starts raining everything gets expensive. Before it starts raining you grab it, keep it. If you don’t use it, great for you, if you use it, you’ve always had it with you — that's venture debt. It’s a debt product, it’s a monthly repayment of principal and interest but it gives a little bit more time for founders,” explains Vinod, who is an IIT-IIM alumnus.

The venture debt market in India is seeing transactions upwards of 300 million to 400 million in a year, with 80 per cent to 85 per cent of it being financed through the three large players Alteria, InnoVen and Trifecta, according to the former Citibank executive.

How two college friends built a startup that turned profitable in under a year, raised $2M

Capital in the times of COVID-19

The pandemic has been a difficult time for most businesses, as cashflow has dried up for many. Capital has been critical for several companies to stay alive. While debt financing may be one of the options to raise capital, it could also sound the death knell for some, warns Vinod.

He explains, “While there is a fairly overwhelming need for capital I think it’s also important to distinguish as to what may be appropriate (depending on) what kind of companies, what kind of situation, because you can take a lot of equity and it will be sub-optimal (and) you don’t kill the company but if you take a lot of debt you can actually kill the company. So one needs to be very careful both founders and lenders alike in figuring out what the right fit is.”

Taking on too much debt can kill a company, warns Vinod.

Vinod stresses upon the fact that venture debt is definitely not the right fit for all in need of capital.  “It’s not meant for all companies, I’ll be the first one to say that. Historically, we have seen 25 per cent -30 per cent of funded startups to be appropriate for venture debt and it may seem like an astonishingly small number but the reason is every single company that has taken venture funding is equity funded,” he says.

Alteria spent March to May largely figuring out what its portfolio needed. “We were in firefighting mode, which I think is true for most of the ecosystem,” says Vinod while adding that since June there’s been a lot more understanding on what’s working and where the damage is most heavy. “So we have also managed to calibrate and figure out which are the newer areas in which we can participate and help provide more capital to companies,” he says.

Unsurprisingly, edtech is one the sectors doing well through the pandemic and thus attracting deals from investors. However, even if a startup is part of a sector that is seeing tailwinds, it is important to have a differentiation factor to be able to seal deals with potential investors, according to Vinod.

For businesses from the worst hit sectors, however, there is little or no interest from venture capital and venture debt firms alike. “There are some sectors that are fairly badly hit that involve physical community, which involves interaction necessarily for the way in which the way the business is done and this could be across travel, hospitality, offline retail, and all of those are going to take a long time to recover. And we are seeing low to no equity interest in those spaces, so consequently from a venture debt perspective these companies would be difficult to target right now,” says Vinod.

Aspiring entrepreneurs and students wanting to learn about the funding aspects of starting up can find a useful overview in the compact book, Venture Capital Investments, by Raj Kumar and Manu Sharma.

The eight chapters, spread across 165 pages, provide a starting point to the world of venture dynamics. Raj Kumar is Vice-Chancellor of Panjab University, Chandigarh. Manu Sharma is Assistant Professor at the University Institute of Applied Management Sciences, Panjab University.

Here are my takeaways from the book, summarised as well in Table 1. See also my reviews of the related books Angel Investing, The Manual for Indian Startups, Straight Talk for Startups, and Startup Boards. 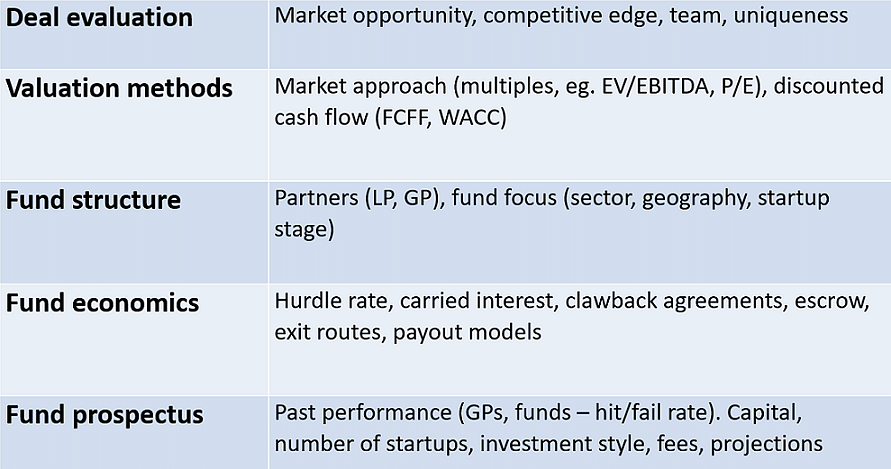 Venture capital is based on the model of high-risk high-return of investments, the authors begin. VCs bring in not just finance but also management expertise, industry connections, and mentorship support.

This is important in cases where the business idea is new and risky, or the founding team is not experienced or balanced. Early-stage VCs target startups are regarded as too small or risky by traditional financers; as the startup matures, risk decreases but return factors on new investments decrease.

Founders can raise funds through debt (highly leveraged; stakeholder value maximisation) or equity (less leveraged). The choice depends on factors like market conditions and type of industry and company.

Factors like liquidity, information asymmetry, and cyclicality define VC engagement, which can last for around 7-10 years in a startup’s lifecycle. “Venture capitalists follow the Pareto principle – 80 percent of the wins come from 20 percent of the deals,” the authors explain.

Deal structures vary in formative, mid-life, and expansion stages of the startup. “VC firms get rewarded for making accurate predictions and identifying a pattern before it becomes a trend,” the authors observe.

Two chapters trace the rise of the VC industry in the US and India, and map portfolios of VCs in India. The IT industry in the 1970s marked the growth of VC as an asset class in the US. In India, early venture financing was done by the government before formal recognition to private investors was given in the 1980s, the authors explain.

Tech and business clusters in China and India grew as investment destinations for many Internet-sector investors from the 1990s onwards. VC-funded startups have helped increase the “absorptive capacity” of business for new innovations.

The journey is not always smooth, particularly when multiple investors are involved in a startup’s evolution. For example, discussions in 2016-2017 for a proposed merger of Snapdeal and Flipkart failed to get an approval of all investors.

VCs tend to look for industries where lower investments can lead to large exponential returns with enormous margins, the authors explain. They examine the size of the overall market, and what percentage can be dominated by the invested startup. VCs avoid saturated markets with large competitors (e.g. Coca-Cola, Pepsi for carbonated drinks).

In the long run, brand equity and external advisors or partners help in growing the market as well. Other factors in keeping with the times are environmental sustainability and eco-friendliness, the authors add.

Based on these factors, agreements specify the amount and purpose of funds, working and runway capital, burn rate, and monthly cash flow.

One chapter packed with equations and tables shows valuation techniques in action. The market-based approach is based on multiples and ratios of enterprise value, earnings, revenue, price, earnings, tax, depreciation, and amortisation.

Based on this, VCs calculate required rates of return, fund performance, and shareholding patterns. This applies to pre-money and post-money stages in multiple rounds.

Discounted cash flow-based valuation determines the present value of free cash flows to the firm (FCFF), the authors explain. Factors like the nature (equity/debt) and the amount of capital raised come into play here.

Common equity and preferred equity have different implications for voting rights and dividends of shareholders. VC portfolio parameters include amount invested, amount returned, exit status, and exit multiples. Based on the performance, success can be “normal, grand or super”, the authors describe (in addition to failure, of course).

Stubborn founders won't go far, the ones with conviction will: Rutvik Doshi of Inventus Capital

LPs do not make decisions on how exactly VC firms manage the funds raised for startups. General partners (GPs) raise and manage the VC’s funds, and extend services for startups. Portfolios are business strategies to attract investors, the authors explain.

The authors describe investment steps like business plan submission, meetings, due diligence, and term sheets. Some founder tips on negotiation and dispute resolution would have been a welcome addition to these chapters. An actual or hypothetical case study of fundraising activities of a startup through its journey would have also helped.

Exit routes of an investment are usually an IPO, acquisition, management buyout, or sale of shares to another investor. The authors show illustrative tables of payout models for multiple LPs and GPs, along with an analysis of management fees.

The last chapter of the book describes how a VC raises funds via a prospectus presented to LPs. The prospectus describes the track record of the GPs, performances of its earlier funds, fee percentages, number of startups targeted, and anticipated returns.

Overall returns and riskiness of past performance are assessed by LPs. For example, there may have been too much dependence on the success of only one startup instead of a few startups.

The book ends abruptly with this chapter. It would have been great to end with some suggestions or advice for founders and aspiring investors, or with some analysis on emerging trends and developments.