The Logistics industry has emerged as one of the heroes of the pandemic. With people increasingly dependent on ecommerce to meet both essential and daily needs, the sector has witnessed a huge surge in demand. Although this has put the spotlight on the key role Logistics plays in our economy, there is unprecedented pressure to scale up and increase efficiency while optimising costs.

The past year has also seen the sector benefit from tailwinds such as being granted infrastructure status in 2017, which opened up several institutional funding opportunities; and increased interest from investors. There has also been increased support from the government with a Logistics division created under the Department of Commerce to formulate policy changes, update procedures, identify bottlenecks; and scale the deployment of technology-driven solutions.

To understand the pulse of the sector and what some of the major players in the Logistics sector are saying, YourStory and Amazon Web Services (AWS) hosted a roundtable discussion with 14 Founders, CTOs, CEOs and business leaders to understand Disruption in Indian Logistics & Transport-tech Ecosystem. The session was moderated by Guru Bala, Head of Technology and Solutions, AWS Specialized Services. 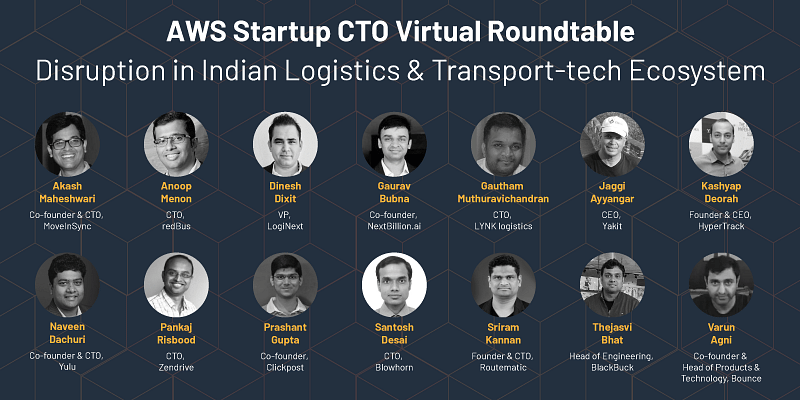 The session began with a fireside chat with Thejasvi Bhat, Head of Engineering, BlackBuck, and Pankaj Risbood, CTO, Zendrive, who spoke about how the dynamic in the sector had shifted with the onset of the pandemic. Both agreed that their number one focus was on safety.

“Safety has become this top thing that is driving business value. At Zendrive, we focus on solutions around transportation safety, understanding how drivers are driving, behaviours that may increase the risk of collisions, and risk mitigation such as roadside assistance and emergency assistance and even insurance follow-ups in the event of a collision,” said Rishab.

He added that there is an increasing need for road safety solutions, and that several online cyber safety players were also getting into the fray.

Speaking about how the pandemic had affected the industry, the majority of which is still unorganized, Thejasvi said, “The pandemic has created some amount of disruption. Prior to its outbreak, things worked like a well-oiled machine because you knew where the trucks were going, and hence, you could predict demand and supply. With a dip in demand, truckers started exploring their own routes. We gave fleet owners a suite of services from tracking services to fuel capability, insurance and so on and so forth. We are also connecting customers who want to move tonnage with the right supply partners.”

Another area that was likely to see disruption was insurance. With most people driving only a fraction of what they used to, many are questioning why they need to continue paying the same premium.

“Insurance has always been a 3 to 5 percent margin business. And now, insurance firms have to reduce costs further because there is downward pricing pressure. Then, it makes it very difficult and we are seeing increasing demands for usage-based or behaviour-based insurance as opposed to a blanket annual insurance,” said Pankaj.

After the fireside chat concluded, the rest of the panel also weighed in on what their focus areas would be. It was no surprise that once again it was in providing protection against contracting the virus. Anoop Menon, CTO, redBus said, “We are transporting hundreds and thousands of passengers every day. A sense of safety has to be brought into the business. Our safetyPlus programme has evolved into a completely different animal. We have hired external auditors to check that we maintain the highest level of standards, and 60-70 percent of our operators have already signed up for the programme.”

Akash Maheshwari, Co-founder and CTO, MoveInSync believes that a huge fear psychosis exists and people will not travel unless they are compelled to. “We built a site called covidhotspots.in to identify affected zones in the city, but that has gone for a toss as there are so many containment zones in Bangalore. So, I think it’s important to strategize every week. We should not expect any transport of people for the next few months. Most of our customers feel that not even 10 percent of their employees will return till there is a vaccine.”

While the transport of people has fallen, the number of people ordering goods online has skyrocketed. Dinesh Dixit, VP, LogiNext said that they have seen a lot of traction in deliveries. Dinesh, who is based in the US, said that there was a 60 percent increase in furniture delivery as people have been trying to improve their homes under the lockdown. “Delivery companies are already dealing with razor-thin margins, whether it's quick-service restaurants or even third-party logistics carriers. They have now been categorised as critical service providers, so they are among the few who could actually run their businesses. A lot of it is around messaging, and with concerns around safety, many are reaching out to us to provide tracking information so the customer gets visibility in real-time,” said Dinesh.

Naveen Dachuri, Co-founder and CTO of Yulu agreed that more people would be choosing to stay home. “Indoors is the new outdoors. There will be more demand for food services or delivery services because people simply don't want to go out. The second thing is we have to somehow make our users feel that whatever the services they are using are safe,” said Naveen.

Another interesting trend that could emerge is brands reaching out to customers to establish themselves as safe. Santosh Desai, CTO, Blowhorn said, “A lot of brands that were in the B2B sector are now connecting directly to the customer rather than go through another omnichannel partner. It could be as simple as connecting with them over WhatsApp.”

In addition to allaying customer concerns over safety, logistics providers have also been working to streamline their processes to ensure on-time deliveries. Kashyap Deorah, Founder and CEO, HyperTrack said, “Hyperlocal package delivery has been doing well. Maps are more accurate, and today, there is less traffic on the road. As long as you can make sure that the address is accurate on both sides, ETAs should be accurate. The biggest pain point in delivery from an ETA perspective is the first 100 metres and the last 100 metres, when you factor in waiting times, parking, etc. So modelling that has always been the bane of the industry.”

Delivering custom solutions for businesses will be way forward. Gaurav Bubna, Co-founder, NextBillion.ai, said, “The main challenge is that problems can also be very unique to both transportation modes and geographies. The way addresses are given also vary vastly from one country to another. In India, detailed addresses are provided; in some parts of the Middle East, we get instructions to meet the recipient at the tree near the bus stop. In such situations, Google Maps is just not enough. So, we are hoping to build something that offers much higher performance at a better price point that will be tailored and customized to each business.”

Accurate timing is especially important when it involves transport for people going to work. Sriram Kannan, Founder & CTO, Routematic, said, “People plan their schedules around these timings. My favourite thing to say is: you wake up because you have to go to the office, you don’t wake up and decide to go to the office. This takes a fair amount of time series analysis and we routinely process around 300 million samples a day to get a predictive model that is 95 percent accurate to within 10 minutes.”

Delays can also occur when a relationship of trust has to be built. Gautham Muthuravichandran, CTO, LYNK logistics said, “We have started doing something called distribution as a service during the COVID period. We have made partnerships with FMCG companies, and we have rented out some warehouses to deliver to retail stores. Because we've been in this space for only three months, we have seen that whenever we go and deliver a package to a particular retail store, they open the box and check everything. We have tried various things like transparent packages, but they don't believe in the concept of returning things and are not very sure we are coming back. This process of waiting at the store can take more than 20 minutes.”

Jaggi Ayyangar, CEO, Yakit believes that cross-border and B2C commerce will definitely benefit. “Our main problem is supply, not demand, as the latter is huge. Currently, our delivery date algorithms have been thrown a curveball because there is not enough data and things are fluctuating widely. Geolocation is very important and we will be happy to use any APIs that AWS has to help us with that.”

In terms of sharing data, some of the participants expressed the view that common information such as routing and ETAs could be part of a common store that they could all tap into.

Prashant Gupta Co-founder Clickpost said that they were already using data from third-party logistics providers rather than using more popular APIs. “This includes tracking shipments, ETAs to show end customers and with hub-to-hub movement. This has worked really well for us and we have had over 90 percent accuracy with this.”

However, a key factor that needs to be taken into consideration before creating a data lake where everyone can contribute is the need to standardise the data that is being generated. “With data flowing in from different IoT devices, it has to be streamlined and put in a format that can be consumed by everyone. So I think the focus should be more on first standardizing the platform itself from where the data is coming in,” said Naveen.

According to the "Indian Logistics Industry Outlook, 2020”, India’s Logistics sector is set to see growth driven by development in the transport sector, demand for eCommerce; changing consumer patterns; a shift in service sourcing; government reforms, and most importantly the adoption of digital technologies. Current players and future entrants will have to hit the road running, innovate and adapt to these evolving stay relevant in the future.